Press Release for Immediate Use

Debbie Sardone, founder of nonprofit Cleaning For A Reason and owner/president of Buckets & Bows Maid Service, was given the Jack D. Ramaley Industry Distinguished Service Award at ISSA’s annual convention in Dallas.

Sardone was recognized for having demonstrated outstanding service to the cleaning and maintenance industry through innovation, professionalism, leadership, elevation of industry standards, promotion of the association’s growth and development, dedication without personal gain and emulation of the ISSA Code of Ethics.

“I am so honored to receive this award. It’s proof that doing what you can to help others can start small and grow big beyond your wildest dreams. And it’s a reminder that using your business to do good rewards you over and over again,” Sardone said.

Sardone received the award in a private breakfast meeting of the ISSA board of directors on day two of the 15,000-person convention, surrounded by family, friends and Cleaning For A Reason staff members. She was acknowledged by dozens of owners and leaders of the country’s prominent commercial, janitorial and residential cleaning companies.

Sardone stood on stage in her signature pink holding the trophy and talked about lifting others while you climb and dreaming beyond money and profits.

Day four events turned out to be an even bigger thrill for Sardone. ISSA Charities Executive Director Mike Gies kicked off the morning with a talk about the power of the intersection of profits and purpose.

“There’s no better example than Debbie Sardone,” Gies said in his opening comments, where Sardone’s award was made public and she received a standing ovation.

Then followed the Fireside Chat with George W. Bush – the highlight keynote address of the week-long convention.

Sardone had the honor to meet the former president backstage after his interview. It made for a lifetime memory, she said, especially when Bush indicated that he knew who she was and mentioned that he made his final interview comments with her in mind.

The former president talked about people not waiting for the government to make things happen but rather taking action themselves in service to their communities, reminding the audience that this is what makes America a singularly special place.

Sardone is a long-time resident of Flower Mound, TX. In addition to being owner/president of Buckets & Bows Maid Service, a 30-year old, award-winning residential cleaning service serving southern Denton County, Sardone is also an author, speaker and consultant. She and her husband Steve also own Speed Cleaning, a manufacturer of eco-friendly cleaners and distributor of quality cleaning tools based in Lewisville. 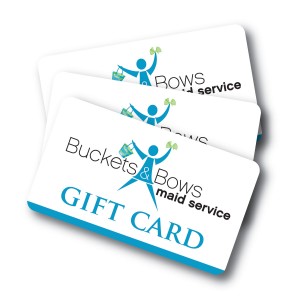